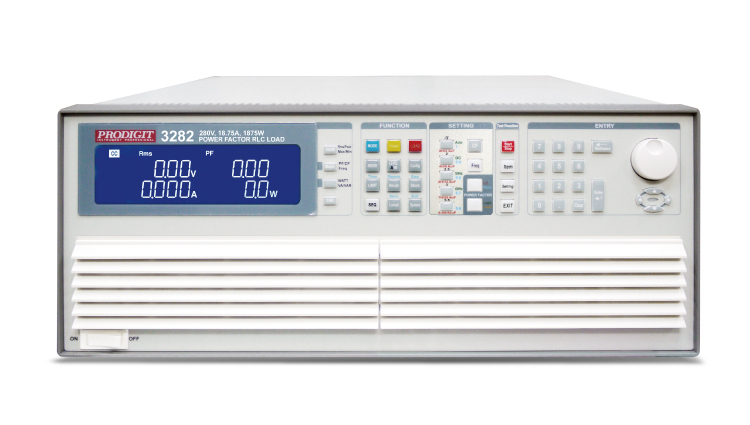 In addition, in terms of specifications, the 3270 series voltages are respectively 350Vrms, 425Vrms and 480Vrms, the power capacity of a single machine, it not only has double the load current and power with Turbo mode, but also has the expansion capability of up to 8 Master/Slave units, single-phase and three-phase power supplies test are supported by 3270, that is single-phase 8 units in parallel or three-phase delta Δ or Y multiple units connection applications.

For the inductive or capacitive load of general household and industrial electrical equipment, various electrical equipment that requires the load current to lag or lead the voltage, such as the motors of electric fans, the compressors of air conditioners, and refrigerators etc..

Prodigit's 3282 RLC power factor AC load can simulate the power factor load of household and industrial electrical appliances. Anti-islanding test is provided for the grid connection function of solar inverters, electric vehicle inverters and energy storage devices. The capacity of 3282 stand-alone 280V / 18.75A can reach 1.875KW / 3700VA max. Just input the load parameters of various electrical equipment and Inverter in 3282, the inverter/UPS AC power output which to be verified is connected to the 3282 AC load that can simulate inductive / capacitive power factor loads of various electrical equipment to do test.

In addition to providing resistive/rectifying loads for Inverter/UPS, the 3282 also has the test and verification functions required for inductive/capacitive loads. This provides the best compatibility test solution for inverter and UPS power supply to various household and industrial appliances.

3282 also provides up to 8 Master / Slave units expansion capabilities, that is single-phase up to 8 units in parallel or three-phase Δ or Y multiple units connection applications are supported, optional interfaces include GPIB, RS-232, USB and LAN.